Race day was finally here! We were up at 5am and Lisa and I went down to get a quick breakfast before grabbing our bags and heading down to the lobby. A mini bus had been organised for a group of us which was great and we were dropped off right at transition. 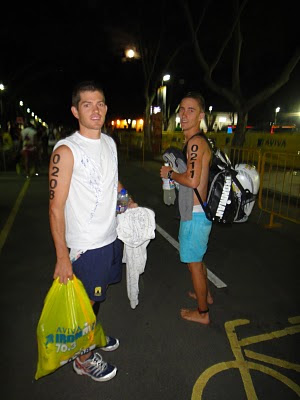 Mark and I number and ready to head to our bikes.

First thing to do was to get numbered. They use the number stamps which I thought was pretty cool (just like they do in Hawaii). Then it was time to set up my transition area and head out for a quick warm up jog. After that was done it was time to relax for a while before a swim warm up and our wave start. 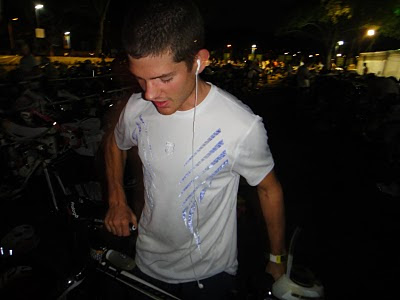 Just did my run warm up and final check of my bike. Ready to roll!

I lined up in the front line on the beach and made sure I was positioned far over to the left as there was a strong current. When the start siren went I was very quick off the mark and quickly made my way towards the front. One very fast team swimmer went off the front of the pack and we didn’t see him again. There was a bit of jostling for position for the first couple of hundred meters but I eventually found my way to the front of the pack and got into a good rhythm. The swim course was two laps, with the first one being smaller on the inside of the main buoys. I couldn’t sight the small orange buoy used to mark the inside lap but that wasn’t too much of an issue as I made my way towards the rope that went around the entire swim course! In the last 400m of the first lap we started to pass the slow female swimmers (who started 10mins before our wave). I made the decision to go straight through them and it worked pretty well as there were quite a few gaps.

At the end of the first lap we ran up onto the beach for approximately 30 metres before starting the second lap. It took about 100 metres to get the legs and arms going again after the little run. It is always a struggle to get back into a rhythm. The second lap was congested with the female swimmers but again I didn’t get into too much trouble. I worked hard on the back section into the current but another swimmer got a small gap on me. I tried to bridge it but it was difficult with the congestion. On the way back to the swim exit I had a very good line, slightly closer to shore than everyone else and that seemed to work as it got me right on the turning buoy for the last 50 metres into shore. I had a quick look back once I was out on the sand and there were only a couple of blue caps around! I then started the long run to transition (never fun).

My swim time (including the run to transition) was 33.42 and I was first out the water in my age group and I think about 2nd or 3rd in my wave.

After the long run to transition I made my way to my bike, I did have to double back as I missed it by a few bikes. As the swim was a non wetty swim all I had to do was clip my race belt on and buckle my helmet up and I was off. Just as I was leaving my rack I saw Matt Burton run to his bike, this was going to make the ride a little more interesting! 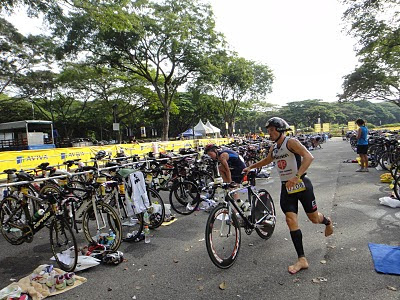 After a quick transition I was ready to get to work on the bike.

Out onto the first of three laps the roads were quite, with only the faster female age groupers on the road and the pros. About 5km into the bike a team rider came past me and shortly after Matt came flying by. Once we were out onto the main section of the bike course (a closed highway with two lanes going each way) I bridged the gap back to Matt and stuck with him until the turn around. At this point I made the decision to hold off as he was going a little too fast for me that early in the race (he went on to have the fastest age group bike slipt). I had a chance to see where the rest of the field was when I made the turn and I was happy with the gap I had after the swim!

On the bike course there is an extension, which is a closed 6 lane highway (3 lanes each way) which was pretty cool (I could image the Abu Dhabi race being like that for 200km). On the way back to complete the first lap I saw a few crashes in the opposite direction and there were many more throughout the day. The course goes back to a narrow tight section before detouring onto a foot path and back onto the service road to transition, not the best course design... It was great going out onto the second lap and to see everyone cheering!

The second and third laps were much busier and the narrow bits were not much fun. I was yelling ‘keep left’ most of the time and the riders were pretty good at moving over. I made sure I drank my water and electrolyte and had my gels (very important given the humid conditions!).

I had a very good ride and I felt in control and comfortable and was in a good frame of mind heading into the run.

I was quite impressed with how consistent I was with my laps!

Into T2 with a smooth dismount, I ran my bike to my rack (not passed it this time) and pulled my socks on a slipped into my K-Swiss Konas.

The run was two laps with a 4km loop heading towards the airport before heading back past transition and the finish line and out for a 6km section. I left transition feeling good and was running in a reasonable rhythm. I kept a keen eye on my GSP and my speed was all over the place! I got to the first aid station and no one was holding out cups for us so it was self serve.

Coming back past transition for the first time it was good to see Lisa and the others. I put a brave face on because I wasn’t feeling great. Tom gave me a split to Matt who was 3 mins up the road. This was better than I thought as he was only 2.30min ahead of me off the bike. We deviate off the foot path on to the grass as we go past the finish line. It is only a 50 metre section on the grass but it was probably the hardest part of my day. I think was I running at 6 min/km pace. Just as I got back on to the path I had to stop and stretch my legs. I continued onto the next aid station slowly and I was hurting. I made sure I got my gels down and walked the aid station to get water down.

It took forever to get to the far turn around and it wasn’t made any easier by the busy foot path. For some reason the race organisers didn’t close the foot path and we were weaving in between walkers, bike riders, roller blades and dogs.

At the start of the second lap I once again saw everyone which was great. I think they all saw the hurt in my face and gave some words of encouragement. I pushed on in survival mode and got my gels down, took on 100 plus, cola and water. Once I came past transition for the last time I knew I wasn’t too far from the finish. I put in everything I had and it hurt! I saw Matt who had made the final turn and was about 4km from the finish (I was about 6km at this point) and gave him a thumbs up to say congratulations. Once I made the turn I crossed paths with Mark and was about 1km in front of him. When I was about 4km from home my calf’s started cramping. I pushed through from as long as I could before I had to stop and stretch them. With 1 km to go I had a quick look back to see if Mark had caught up and I then put in a last effort to get to the finish line and I sure was happy to finally get there! 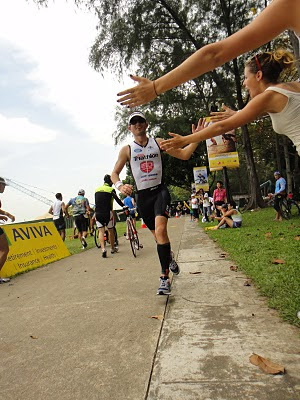 Smiles all round, finally at the finish line!

The athletes from WA put on a good show with some great results. The Male 18-24 age group was made up of guys from Perth. Matt Burton was 1st, I was 2nd and Mark was 3rd. 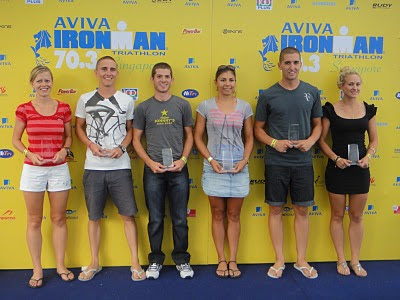 Some of the WA athlete on the podium.

A big thank you to everyone who supported me during the race. Particularly Lisa, Teresa, Dave and Kate Luckin and Ian who came over to watch Mark and I race!