Each year on the Labour Day long weekend Albany Triathlon Club hold the Albany Classic Olympic Distance race. I did this race last year and really enjoyed it so Lisa and I once again made the 5 hour trip to Albany in the Great Southern region of Western Australia.

Mum and Dad also came down to watch and we all stayed in a beach chalet at Emu Point. It was nice not having to set up a tent and to have food cooked for a change! (We normally camp for these country races). We spent the night playing a card version of Monopoly, lots of fun and it got very competitive.

It was off early night as it had been a pretty long day for me. My good friends were racing Ironman New Zealand and I was up early to follow them. Have a look after my race report for details on that! 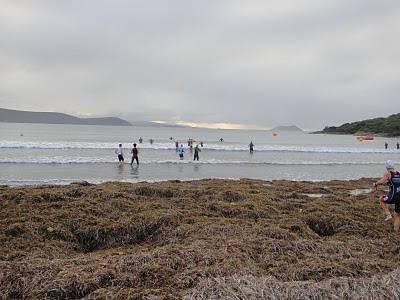 The swim course was two and a half laps in very calm waters at Middleton Beach (last year it was very rough and according to the race director has been rough for the last 2 months!) and was a non wetsuit swim for the open field. I had a great start and was swimming well. The front group got a bit of a gap on me and I unsuccessfully tried to bridge the gap. At the end of the first lap there was a bit of congestion in the water with the other waves now all in the water. I did my best to zigzag around them (apparently this is a problem in Singapore so it was good practise). 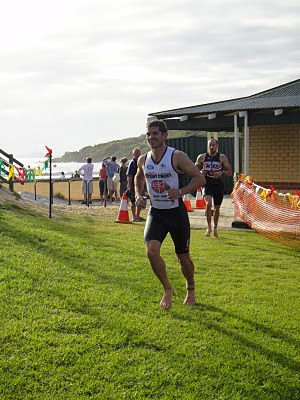 All smiles after the swim.

Transition was nice and quick with no wettie to pull off and I was out onto the 3 lap bike course. On the straight sections I could see a few guys in front of my so I tried to push the pace to catchup to them. It was at this point I realised I didn’t have any power in my legs. I continued around the course and got passed by two bikes. I tried to stay with them but could not hold their pace. I felt very average on the bike all day and did what I could to get around the course. 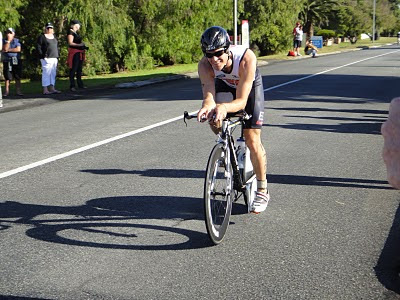 No power in these legs today!

Out onto the run course I was feeling ok for the first few kms, after this my legs started to feel pretty heavy. Just after the first turn around point I could see Mark was flying on the run and knew he would catch me shortly. I wasn’t running fast but I felt I was at a pace I would be able to maintain over the half distance. At the 5km turn Mark passed me and told me to come with but my legs couldn’t go any faster today. 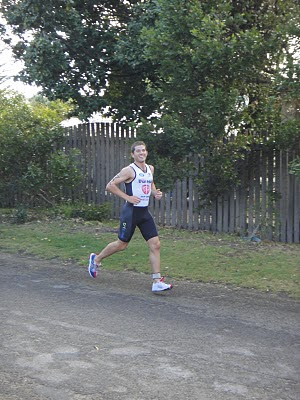 Half way through the run. If only Mark ran a little faster we could have had a photo together!

It was a tough slow day in the office for me, but happy to get to the finish line. I was hoping to go a lot faster over the bike and run but will have to save that for Singapore in 2 weeks!

The rest of the afternoon was spent relaxing, sleeping and doing a whole lot of nothing.

As for Ironman New Zealand, 8 Eclipse Fitness athletes went over to compete. Johan and Helen had pretty amazing Ironman debuts. Johan won his category (M 18-24) in a time of 9.13 and finished 13th OVERALL and Helen came 2nd in the Female 18-24 in 10.43. Janine, was another stand out performace, probably one of the best on the day. She won her category (F 35-39), in an amazing time of 9.55 and to top it off was the first age group female across the line and 8th female overall. Scott, Ash, Prinz and Max also competed and finished in what looked to be pretty miserable conditions on the day.

Luke Harrison a fellow LSDsports.com team member was the number 1 age grouper on the day finishing 6th overall in 8.58, with a 2.55 marathon! 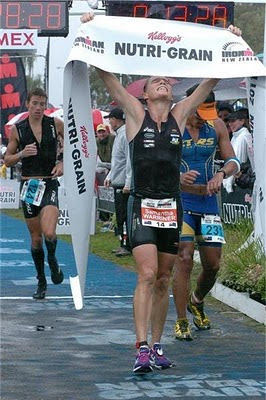 Johan (on the left in black) crossing the finish line just behind the female champion Sam Warriner.

I have a few hard sessions to do this week before the taper for Singapore starts. The countdown is on! 14 days to go.