The Point Walter Triathlon was held yesterday and much to my disappointment, it was changed into a duathlon. Perth had a hectic hail storm on Monday last week, which has been labeled "The Great Storm of Perth". This has caused our river be become contaminated due to blocked storm water drains and the Health Department didn't allow swimming (fair enough).

We started the race with a short 3.5 km run to make up for the 1500m swim. I had a reasonable run, but was off the pace from the top runners. I had a quick transition and went about making up as many places a I could. I managed to get into 3rd place and was working with a few guys faded towards the end of the 40km bike which was disappointing. It is a tough course and I had some muscle fatigue from my Saturday hills ride. I was using a wheels set thanks to Ian Mansfield from XU1 Sports. I was lucky enough to ride a 808/1080 set which were awesome. Unfortunately this course is slightly hilly and the wheels were flexing when I was getting up out of my saddle and rubbing on the chain stay so I was taking it easy up them because I didn't want to scratch them.

Off the bike and I had another fast transition and started the 10km run. I eased my way into a good pace but at the 2.5km run turn I started to struggle. I shuffled my way through the remaining 7.5km crossing the line in just over 2 hours.

In summary, not a great race, probably my worst for the season but on a positive note, I had some good transition training.

We are now into the business end of training for the Busselton Half Ironman, only 5 weeks away. Eclipse Fitness is having a local training camp over the Easter break which will be great. On Easter Monday I will be racing the ATTA 80km Time Trial in Wandi, which will be a good hit out for the half to see where my cycling is at. The last race of the TriEvents series is on the 11th of April at Hillary's and I am really looking froward to wearing the leaders jersey and hopefully consolidating my position at the top for this series.
Posted by Andrew Tyack at 5:50 PM No comments:

It has been a while since my last update and this is the low down on what has been happening:

I took a few weeks off training after Geelong with the exception of the Hillary's sprint distance race (TriEvents Race 3). I went in to this race with the intention of having fun. I had a great swim coming out in 3rd and then put some pressure on in the bike. I lead the bike race (having the fast split) and had a 23 second lead coming into T2. The run leg was slow and my legs didn't feel like running. I battled through finishing in 2nd 31 seconds behind Karl Reindler, with Mark Luckin rounding the podium off.

My next race was the Albany Olympic Distance Race. I raced in the open category being on of the smaller races to get some experience racing against the likes of Sean O'Neill and James Lewin. The swim was a 2.5 lap course and was ROUGH. I exited the water in 21.41. 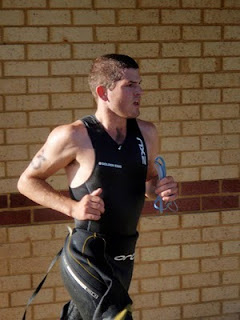 The bike course was 2 laps and had a 10km undulating section on each lap. The wind was up and made a few of the downhill sections a bit sketchy but overall it was an awesome bike course. I was given a drafting penalty going up a hill which I though was an incorrect call. Not much can be done once you have given a yellow card. So at the end of the 40km I sat in the penalty box for 2mins. I was really disappointing i was given a penalty as I believe I race honestly. The run was also 2 laps and along a beach foot path. It was slightly undulating and I felt strong on the run. I didn't have the fastest run but I felt in control and focused which is a good sign. I finished 7th overall (last in the open category). I would have placed first in my age group so that gives me confidence things are going in the right direction.

Race 4 of the TriEvents series was next up at Champion Lakes and I was very motivated for this race. A few of the big guns in my age group were not racing (Johan Borg, Karl Reindler and Mark Luckin) and I was very confident that I had a strong chance of getting a win (my first for the season) which would put me in the leaders jersey going into the final race of the series. I had a solid swim coming out in 11.40, in 3rd place. The conditions were perfect for the ride with not a breath of wind in sight. I powered around the course posting a solid bike time and i entered T2 2.55min lead. I run confidently across the line 2.25 ahead of second place. I finally got my first win of the season and have put myself in the lead of the TriEvents series. The last race is Hillary's Race 2 on April 11.

Yesterday I was asked by Karl to compete in the Corporate Triathlon in Freo for a bit of fun. We entered in the Pairs category (where they add our finishing times together, with the lowest paired time being the winning team). We had a great time and flew around the very short course, consisting of a 250m swim, 10km bike and 2.5km run. We were basically going to be racing each other and see how fast we could go. I came out the water in 3rd with Karl hot on my heels in 4th. We flew through transition and onto the crowded 3 lap bike course. We pulled each other around the course ducking around everyone (legally) and before we new it our feet were out and we were off on to the run. I got a few meters on Karl through transition and basically maintained that distance throughout most of the run. Towards the end Karl pick it up and came level with me but we decided to cross together. We won our category and posted the fastest overall times (both finished in 32.12). Nice little hit out, but I forgot how much those small races hurt!

So that the low down on whats been happening on the racing front. Training is coming along nicely with 6 weeks left until Busselton Half. I will be working really hard for the next 4-5 weeks to get my fitness up ready to knock over a PB at busso.

Cheers,
Andy
Posted by Andrew Tyack at 5:46 PM No comments: