Triathlete of the Year!

The Triathlon WA 2009/2010 season officially came to an end on Saturday Night and I was awarded Triathlete of the Year for my age group (Male 20-24).

After a long season that is now all finished I will outline a few of my memorable results and achievements:

A big thank you to everyone who has supported me over the past 12 months and particularly those who helped me getting to the Gold Coast to compete in the Triathlon World Championships:

A very big thank you to Ian Mansfield of XU1 Sports. Ian has been such an important part of my season and I am really happy to have some good results which I can share with him and fast bike splits which I put down to his awesome wheels he so generously lends me. Thanks mate!

So to wrap it up, a very successful season. I have been looking at my goals and race calendar for next season and I am really looking forward to starting to work towards those on my return from Europe on August 7th.

2 weeks on from Busselton and I am back into training! I wasn't planning on training after the half before Lisa and I head over to Europe but after 2 weeks of doing nothing an drinking a lot more then I ever would, I started to feel unfit and fat. So I am easy back into some unstructured training for the next 3 weeks.

I am actually going to work pretty hard and get some level of fitness back so while I am away I can maintain some running and swimming.

I have started to plan what I want to do next season with the major races below:

There is also the possibility of the Gold Coast Half, however that will be 8 weeks after I get back from Europe, so I will not commit to that until I am back.

Mark and I were planning on doing the Asian Pacific 70.3 Champs in Phuket in December, but with all the political issues there at the moment we have put that idea on hold.

Posted by Andrew Tyack at 8:55 AM No comments:

I was a bit worried about the swim start because in my last race at Hillary’s I got caught up in a bit of trouble at the start as everyone swamped me. This was the first time is has every really happened and I was not comfortable, so I was determined to get a clean, clear start. Stu gave us the heads up on where to start and I must say it worked perfectly! I started to the side near the buoys and when the start signal went, I pushed hard early. I could see people over to my left slightly ahead, only due to their starting position. I had the perfect start and from the get go I was in clear water, the way I like to swim! So, from my positioning I had a very uneventful swim and just went through the motions. I was very conscious to keep my sighting the buoys every few strokes and concentrated on my breathing and stroke rate. The swim was slightly long by all accounts and was reflected in the time, but I was very happy with it and came out 4th in my age group.

Into transition and I heard some cheers from my support crew and made the long run to my bike. I dropped my goggles in the process but didn’t bother picking them up! A quick change over and I was out onto the bike and ready to get stuck into the 90kms ahead.

The bike course was a 2 lap course this year which suited me really well. After my swim I was in a good position sitting 4th in my age group and one of the first age groupers on the road (i think there were 5-6 in front). I went about finding a comfortable rhythm to recover from my swim and for the first 15 minutes concentrated on getting just water down to flush any sea water I swallowed. Just after the Layman Road round on to Tuart Drive I got in the lead of my age group and was the first age grouper on the road. It was a pretty cool experience riding up the front and a place I hope to be in my future races!! I saw Luke Mckenzie leading the pro race and he was absolutely motoring on the bike and had put in some serious time over 22.5kms over the chase pack. I want to learn to ride like him! At the first turn around point I was able to see my position to who I thought would be a threat to me. I was still on my own and had put a bit of time into the guys I passed early on the bike. Johan was not too far behind in a group of about 3 and Mark just behind them. I was very focused on maintaining my nutrition, speed and cadence and felt very comfortable on my bike.

I saw Lisa just as I made the turn onto Layman Road and she was smiling and really seemed to be enjoying herself which was a good sign! I push through the windy, exposed sections on Layman Road and thought that the chase group would have caught me then, but as I got around I had a quick look back and couldn’t see anyone. Riding back into town is always awesome as my support crew always gives me a big boost and going past the eclipse tent was great. I rode the first lap in 1.08.38, averaging 39.3. Being out in front, with no one on the road for 45km was awesome.

My goal was to ride consistently so I needed to maintain what I did in the first lap. With all the other waves now on the course I was able to hide a bit from the chase group as it is always harder to chase someone you can’t see! I was looking forward to getting to the turn around to see my position. I had put in some time to Johan’s group which was a great confidence booster.

The last section on Layman Road was tough and we had a nasty head wind for a few kms. I was really struggling to hold above 31km which was not a good sign as I thought that I was bonking, but as I got around a bit further my speed went up and I finished strongly into transition and passed a couple of pros! I finished the second lap with an average of 39km/hr which I was very happy my consistency. 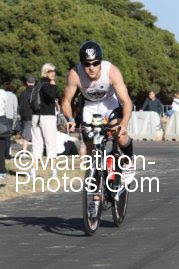 I came into T2 in first place and the first age grouper. It was awesome running into an empty transition area (with the exception of the pros). Another fast change over and a few high fives to my support crew and I was off.

The 3 lap run was going to make or break my race. I started off nice and steady with the intention to really build through the half marathon, but unfortunately this didn’t eventuate. I got into a nice rhythm early and started turning my legs over. At every aid station I had a sip of my gel flask and washed it down with water, and this became my routine for the first half of the run. I then moved on to coke for the second half. Johan passed me at around 2.5km and I was really excited for him because this was his race, he was in seriously awesome form leading in and I was happy to be able to hold him off on the bike!

I kept turning my legs over and just wanted to hit the finish chute and it finally came after a long 1 hour and 40 mins. Not the run I was hoping for as I new I was capable of running 90mins. 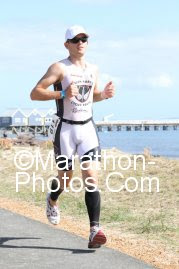 Well I finished in 3rd place, and 47th overall. I can take a lot of positives out of my race and will build on those and address my weaknesses for next year. I am really happy with how I raced and the result. My goal was to get on the podium and I did just that!

Congratulations to Lisa on her first half ironman finish in an awesome time of 5.37! Also a big thank you to Ian Mansfield from XU1 Sports for his continued support and lending me his Zipp 999 set! They were made for the Busso course.

It’s been along season and I am really excited with how I have developed along the way. It’s now off to Europe for a 9 week holiday and Lisa and I and then back into at the start of August for the 2010/2011 season!

Andy
Posted by Andrew Tyack at 3:39 PM No comments: 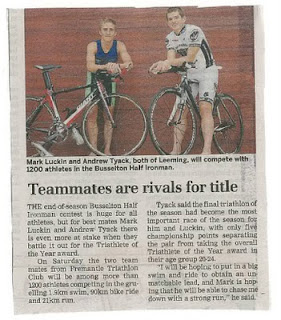 Posted by Andrew Tyack at 12:42 PM No comments: