This morning I raced in my first local race of the season up in Hillary's. The plan was simple: 1 hour, hard, no excuses.

The open wave (with the juniors) was off first at 8am from a beach start and we headed out to sea, before making two right hand turns before the return journey to shore. I had a good start and put my head down and went hard for about 10 strokes. There was a bit of contact on the way out and a pretty big group was forming. I was swimming well and in the main group with no one getting a break on the way out to the first turning buoy. On the way back to shore it spread out a bit and I came out the water about a minute down on the leaders. 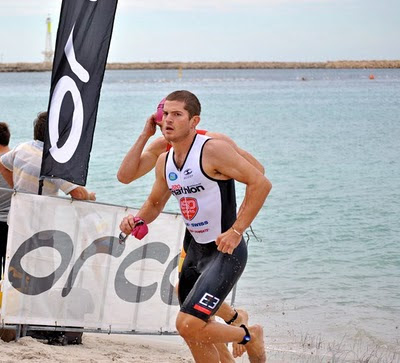 I worked hard on the run to T1 and made up some ground on the boys just in front of me. It was a non wettie swim, so the changeover was very fast and I was out on to the newly resurfaced 3 lap bike course ready to work hard for 20km!

The weather prediction for the day was 22 knot winds, so I had my front training wheel in the car just in case. During my warm up ride I made the decision to use that, rather the then 808. I think it was a good choice as it was pretty windy out on the bike. My bike computer magnet was on the 808 so I didn’t have a computer during the ride, but given it is such a short race and my race plan it wasn’t an issue.

The first lap of the bike was nice as we had no one in front of us. I didn’t have a specific plan for the ride, simply try and catch whoever was in front of me. I rode as hard as I could and picked up a couple of places. Nick Murray (who has just got his pro licence) was in sight just ahead but it took be the better part of a lap to catch up to him and it was only just before the end of the bike where I finally caught him. 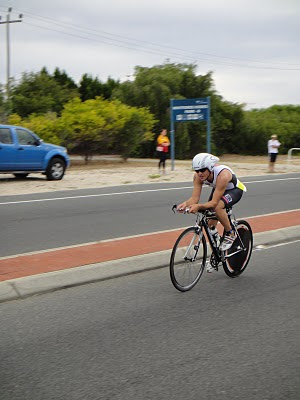 Nick and I got into T2 together and I had a very smooth transition into my new K-Swiss K-Ruuz racing flats and was out just before him. At this point I was in 5th. Nick then came flying past me and that was the last I saw of him! I went about settling into my rhythm and felt I was running well. I was really focused on my form. At the half way point Craig Scott came flying past me and I tried to stay with him, but he continued to gain ground on me, Brandon and Mark were about 500m behind me. When I reached 1km to go, I pushed hard to hold onto my 7th place with the fast finishing Brandon hot on my heels. 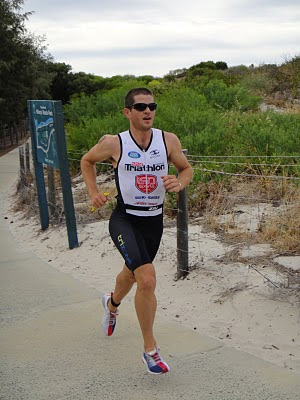 In summary, I was very pleased with my race. I finished 7th in the Open Category, 9th overall (two age groupers were faster than me). I have race up at Hillary’s a number of times and I did a PB time over the course and more importantly, did the fastest 5km run off the bike I have done.

After the race Lisa and I went home and had a quiet afternoon watching a movie and relaxing. I haven't got my program for the next few weeks, but with Singapore only 4 weeks away I'm assuming it’s going to be pretty hard.