We are currently down in Busselton for a weekend of racing with the Busselton Half Marathon which was this morning, followed by the Busselton Jetty Swim tomorrow morning.

The half marathon this morning was the first stand alone half I have done. I was pretty excited to see where my running fitness is and see how my Archilles is holding up!

I had spoken with Stu and had a plan to build into the first 3-4km and then maintain that pace and I had set the virtual partner on my GPS to a 1.24 race time (4min/km). I was racing in my K-Swiss K-onas with socks on which felt a little odd!

The run course was 2 laps on the beach foot path of Geographe Bay. The start of the race was fairly casual. I was very conscious not to go to hard and try and have a nice even pace.

I was following my GPS and was quite happy to see I was in front of it coming up to the first turn around. I was feeling strong and catching a few guys in front! The wind was pretty tough coming back and I held a solid pace. I went through the first lap in 41.52 (3.58 min/km). 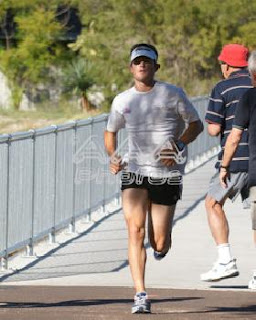 The second lap was all about staying focused, concentrating on holding form, staying relaxed and keeping a steady pace. After making the final turn I was worked hard to keep that pace on track to do 1.24! There was a couple of times my virtual partner was a couple of metres in front but when I saw that happen I showed it who was boss! I finished the second lap in 42.07 (4.01 min/km).

Johan finished 2nd in 1.16 and Helen and Caitlin ran the race together!

We had a BBQ lunch before heading to Simos icecream for an afternoon treat. I did a short 20min recovery run with Lisa riding Helens bike (Lisa’s first time on a TT bike) and Helen, Johan and Scotty did a longer run.

We are off to the movie to see Black Swan tonight and doing the Jetty Swim in the morning.

Black Swan is an intense movie! That’s all I can say about that.

I woke up with sore calf muscles and felt a little tired. It was pretty cold and the tought of swimming around the jetty wasn't to appealing!

It was pretty windy and very cold standing in the water waiting for our start! I was shivering and only got wet at the last second. The start was good and not as hectic as a normal triathlon start which was nice. This was to be the longest open water swim I have done so I went out nice and easy for the first half with the aim to push hard on the way home.

The water was rough and there was quite a big swell. The stingers were out in force and attacked me all over. At one point it felt like I got electrocuted! The first half of the swim to the end of the jetty went by pretty fast and I was feeling good. The return journey was a different story. It was a hard slog into a nice cross chop and I was getting pushed away from the jetty and had to continually re adjust my line. I felt like I was making no ground at some points but i eventually got there. I was very happy to be on land and in some warm clothes!!

I slept most of the car ride home after some solid training/racing!

Lots of training to be done over the next 6 weeks before the big one in Singapore!