Where to start…?
Firstly, a big thank you to everyone that has supported me over the last few years to get me to where I am today!
As of Sunday, I became and IRONMAN.
I went into the race with a lot of confidence. I was confident with my preparation both mentally and physically, however given the enormity of the event (3.8km swim, 180km ride and 42.2km run) I was a little anxious of the ‘unknown’.
A week out from the race, when I began packing the nerves really began. Good nerves… I was down in Busselton from Wednesday afternoon and it was great to relax down there with my friends leading into the race.
On Saturday night, ‘race eve’ we had dinner with the squad and I had a chat with Stu (my coach) about the day ahead.
‘Race Day’
My alarm sounded early on Sunday morning – 3.00am to be exact.  I jumped out of bed and had something to eat before relaxing on the couch.  We arrived at transition at 4.15am to pump my tyres on my Schnell Carbon Wheels, put my bottles on the frame and turn on my Garmin.
A quick toilet stop and it was time to sunscreen up and get suited up in my new Blue Seventy wetsuit.  Good luck hugs and it was time to head to the start line – this is half the battle, race day is the easy bit… (in theory).
I was pretty emotional when I saw my family and said bye to Lisa for the day.  It has been a long journey to the start line and I could not have done it without the unconditional support Lisa has given me.  Triathlon, in particular Ironman, is somewhat of a ‘selfish’ sport, however Lisa has been there every step of the way with me and the short 9+ hours (yes I do mean short when compared to the months of training leading into the event) that I was about to endure was just as much the end of her journey was it was mine.
The 3.8km swim follows the Busselton Jetty and it has to be one of the most spectacular Ironman swims in the world.  I positioned myself at the front of the field and when the race started, I was very surprised at how calm everyone was. I had clear water from the beginning and found a nice rhythm.  Conditions for the swim were average… 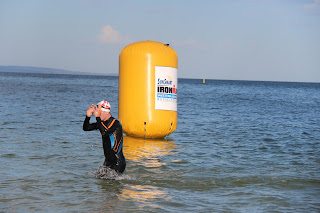 I came out the water 6th in my age group, about 5mins down from the leading age groupers.
Swim - 58.15
Running into T1 I ripped my wetsuit half off, grabbed my bike bag and made my way in to the change tent.  Slightly slower than the transitions I am used to but I got the job done quickly with the help of the volunteers.  Glasses on, nutrition in the back pockets, arm coolers on, sunscreen on. Good to go! I ran to my bike and Mark gave me a quick split to the boys up the road – 5 mins down…
T1 - 2.53 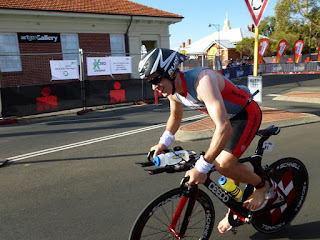 My shoes were clipped into my pedals and I did a smooth running mount, sorted out my shoes and headed out for the first 60km lap of three.  I knew what I had to do on the ride, I knew it was going to be windy and I knew I was in good bike form.  I focused on settling into a nice cadence and was very conscious not to push hard in the early portion of the ride.  The first 20mins I only consumed water before my nutrition plan kicked in. I was setting a solid, very comfortable pace and rode the first lap by myself.  I was passed my Matt Illingworth around the 20km mark (no surprise, Matt has the second fastest bike time on this course…). I continued to get down my nutrition, took on water and Gatorade at each aid station.  At the Forrest Beach Road turn around point, I could see my overall position.  I was pretty happy with where I was placed, a couple of mins down to the leading age groupers and Nick Baldwin was towards the front of the race.  Towards the end of the first lap I saw the leading age group pack (only 4-5 riders with another few solo riders in front) just up the road and bridged the gap just before the turn around.  It was great coming back into town, seeing my family and friends and being at the pointy end of the race was exciting!
I had established a good position in the race, now it was time to settle into a good rhythm for the next 120km.  I caught Nick and another rider at around the 70km mark and stayed with this group for a while, also in tow was Matt Illingworth.  The pace seemed to be very slow heading out along Forrest Beach Road for the second time; I used this time to get some more nutrition down and some fluid.   Still up the road was Luke Burton, who we caught just before we got back onto Layman Road.  The rest of the lap was pretty uneventful.  I picked water and Gatorade at every aid station and a banana portion at one point, I continued to drink and eat and stay the legal 12 metre distance. 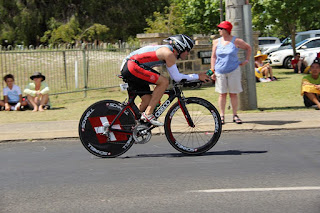 Heading through town as the leading age groupers (our small group) was awesome! Just 60km to go… I hit a bad patch from 135km to 155km.  During this time Nick got a gap on me and I was starting to feel pretty uncomfortable on the bike.  I picked up a bottle of coke at the aid station and rode (pretty slowly at this point). Not much I could do at this point apart from continue to eat/drink, reflect on the times that I went through bad patches in training and focus on the things that I could do, pedal up – pedal down… I eventually came good after what felt like a long 30km and got back into a solid pace for the last 25km.
My first ironman bike ride complete and I was very happy to be off the bike!
Bike - 4.46.07 (second fastest age grouper) 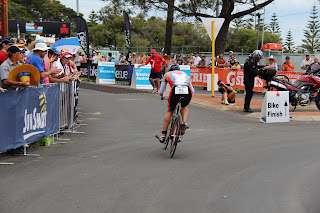 I jumped off and ‘released my bike at speed...’ to the volunteers (sorry to the catcher I had!) and ran through to pick up my T2 bag.  Into the change tent, GPS on, socks, shoes, hat, nutrition all while the awesome volunteers lathered me with sunscreen! I was 3rd age grouper off the bike, with 2nd place heading out the tent just before me.
T2 – 2.02
Out onto the run, the marathon…42.2km… the last leg… the unknown! Heading out of T2 I awkwardly ran into Timo Bracht (the eventual overall winner!).  The first part of the run is straight through town before we then loop back around and at this point I had all my support crew with me, this was awesome! A quick look down at the GPS, settle the pace and ready for the first out and back section.  At the first aid station I took on a salt tablet, gel, water and Gatorade and put ice down my shirt (this continued for the majority of the run).  The course is 4 laps and allows you supports to see you on numerous occasions, which makes the run more enjoyable! 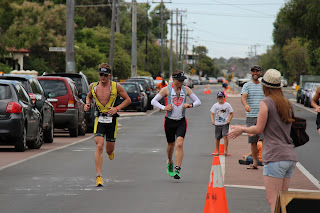 I help a solid pace for the first two laps before the wheels started to fall off! This was after 7 hours of racing so no surprise that it was going to happen at some point.  I ran the first half without stopping at all and during the second half made the decision to walk each aid station.  The third lap was hard.  I managed to hold good form through my low patches however my pace slowed… I ran reasonably well in between the aid stations and use the aid stations to take on as much nutrition as I could handle. 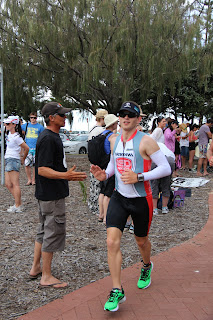 The last lap, 10.5km to go, I was nearly home (but still so far far away!). I ticked the legs over, soaked up as much support as I could and did what I could to get to the end.  Running into the finish chute was a great feeling, I high fived my support crew, ran up the finishing ramp and raised my arms in satisfaction of a day I can truly be proud of.
Run 3.31.44
Total – 9.21.01
2nd 18-24 Male
28th Overall 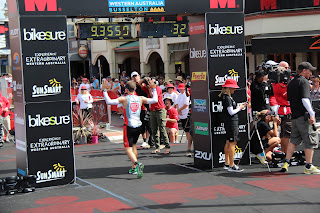