A weekend full of racing

What a weekend of racing. The Hawaii Ironman was obviously the main event, and what a race it was. Won by Australian's Chris McCormack and Mirinda Carfrae, awesome result for the Aussies! I was also involved in two smaller events; the first on Saturday, which was the Sorrento Challenge and this morning, was the Champion Lakes Duathlon.

These races were the first of my season and I am generally happy with how things went.

The Sorrento Challenge comprises a 1.2km swim (2 laps with a 400m beach run in between each lap), 7km ocean paddle and a 7.5km run (with a beach section on each of the 3 laps). The race has a reputation of being held in bad weather, however the weather gods put on a show for us and we had a 30-degree day with calm waters. The race start was 12pm so I was able to have a sleep in which was nice :) 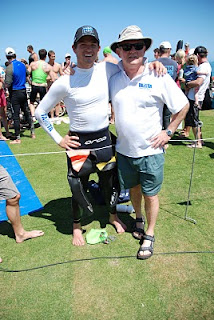 I had a bad start to the swim, but managed to get a decent rhythm on the first lap and made up some ground to a few guys in front during the beach run. My second lap was a struggle and took me a while to get going again and I dropped off the back of the second group. Not my best swim but considering the lack of racing I have done I was pretty happy.

Onto the paddle I wasn't in a bad position, but then the stronger paddlers came flying past me. I lost a big chunk of time to those guys during the paddle, which was expected. I was happy to get off the ski, after being on it for way to long! 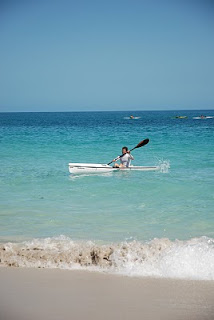 I had a quick transition into my running shoes and started the 7.5km run. I made up some lost ground in the run but the damage was already done from the paddle! Only one runner passed me, so my running is slowly improving! 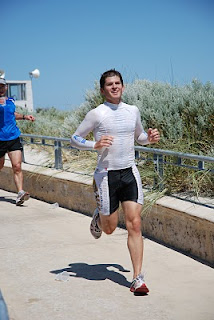 Sunday morning was the Duathlon and I had planned to ride out to the race venue, but the weather had turned over night and the roads were wet so we ended up driving out. The Duathlon format isn't my ideal race, but I was looking forward to testing how my running is coming along. The format was 5/21/2.5.

I was planning on racing with a Zipp 999 set, but with the slippery roads and the bike course it quite tight with a few sharp turns I opted to just race on my training wheels. Turns out the roads were quite dry by the time the race started, but not to worry. 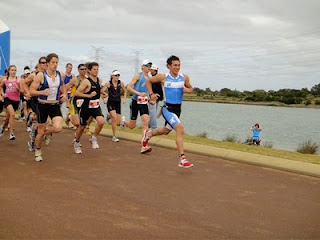 I was very conscious not to go out to hard on the first run, so I settled into a good rhythm that I could maintain for the 5km. It was an out and back course so we could see where we were in the field at the turn around. I was happy with my first run clocking 18.17. 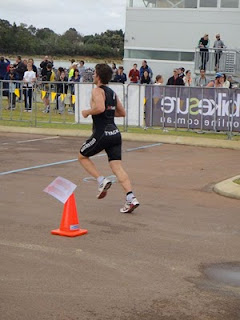 The bike was a 4-lap course. We had a nice head wind on the long straight section and a tail wind through the windy event path. It was the worst I have felt on the bike during a race, but I put that down to lack to short race pace efforts which is not in my program at this point as I have been building my fitness back from Europe!

Onto the final run I worked hard to consolidate my position. I finished in 3rd place in 1.03.48, 1min behind my age group winner. This was also the State Duathlon Championships, so I got a 3rd place for that as well. 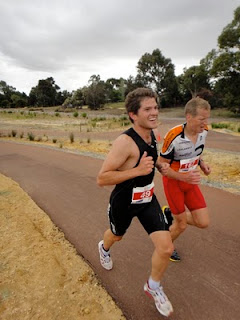 I am happy with how the races went. Given it is so early in the season there are some good signs but also a lot more room for improvement, which will come over the next few months. One thing that needs to happen as soon as possible will be a haircut as it is starting to get a little out of hand! Also, a big thanks to Lisa and Mark for their support at both races. I really appreciate it guys! 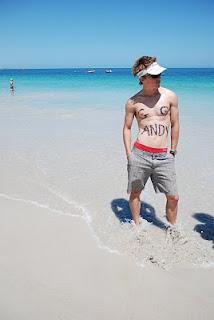 Mark like's to 'show' his support!

Next up is the Anaconda Adventure Race, 4 weeks to go. Then we are back into the triathlon season, but the Bunbury Classic and then Canberra Half Ironman.