I was very excited for this race for a number of reasons:

I was racing on Ian Mansfield’s (www.xu1sports.com) Zipp 999 wheel set as they are some of the fastest wheels around! We had to glue on a new front tubular the day before as I had got a slow leaking puncture during the ATTA 80km State Time Trial on Easter Monday. I was glad to see how to do it properly because now hopefully if I ever do get a flat during a race I will be able to change it over quickly!!

Lisa and I spent the night before the race with Johan and Helen and I had not got any of my race gear ready or set my bike up. So when we got home at 9.30 I was in a mad rush to get everything organised and what always happens when you are in a rush?.... something will go wrong. I put the back wheel and my gears did not want to play and wouldn’t go into the top 3 gears and I didn’t know how to fix it (another skill I need to learn quickly). By the time I got to bed I wasn’t in the best mood but I did sleep well as I was quite tired from the day’s training (150km on the bike and an open water swim).

I got up earlier than usual on race morning and had a long shower to wake myself up. We got to the race venue at around 6.45 and I went and registered and picked up the leaders jersey (I was looking forward to wearing it during the race).

I set up my transition and went for a quick ride to see how the gears were, and apart from not being able to get into the top 3 (which I didn’t think I would need on this course) they were running fine. Ian came over and gave my bike a quick tune up and managed to get 1 more gear working so that was a help. It was then time to head down to the swim start for a warm up. 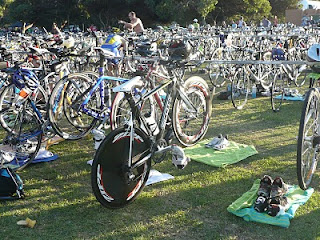 Race
The race start is on the beach with a 10m run to the water. I positioned myself next to Ben Tay, who is always the first out the water by a long way. I wanted to see if I could stay with him during the swim. The start siren went and I hit the water first, but for some reason everyone went out harder then normal and I wasn’t ready for it and before I new it I was in the middle of a big pack with 15-20 guys ahead of me. I am not used to being in this situation and I was a bit unsettled. The start was very rough and congested. About half way out to the far turning buoy I stopped and moved to the side of the pack to get some clear water as they were slowing and I was caught in some traffic! The turning buoy was again rough with people pulling me down but as once through I had some clear water (with the exception of Mark Luckin on my right, who was knocking my right arm every stroke… I think he needs to learn when swimming next to someone you need to be in sync with them! Joking Mark!). I put a surge in and got a small gap during the final section into the beach. It was hard to sight anything on the return journey as the sun was making it difficult to see. I swallowed a lot of sea water but wasn’t an issue during the remained of the race. My swim time was 11.45 which included the run to transition, which was better then I though considering it felt like one of my worst swims! 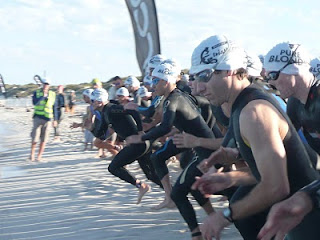 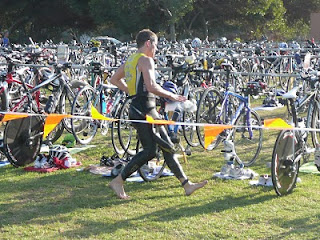 I had a reasonable transition and new Mark was right on my heels, I thought I was in 3rd position at this point. I mounted my bike (not very well, as my shoes flung around) and got my feet in my shoes and started the 20km ride. During the first section my legs felt heavy and fatigued (all I could think was I shouldn’t have ridden so far yesterday). Up the first small rise I caught Jon, who always has a great swim and then was able to check how far ahead Ben was once he made the far turn around. Once I made my turn I saw that I had put little time into Mark and Karl was not too far behind. Coming back to transition for the first lap I started to get my legs and was feeling really good. I didn’t show much love towards my support crew (sorry), but I was in race mode and very focused to get in the lead and build a buffer from the other front runners. The course started to get very crowded on the 2nd lap but I managed to get a fair clear line through the slower competitors. I got a gel down and then I finally caught Ben just before halfway and was much relived to be leading the race. By the half way turn around I had started to put in some time to Mark and Karl which was a good sign. At the end of this lap was happier and smiled at my support crew and gave a wave. The 3rd lap was very busy and I went hard and that paid off as I came off the bike in 35.22 with a lead of 2.07 to Ben and 2.17 to Mark. 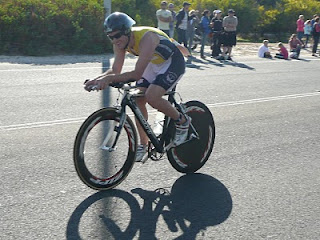 I had a very quick transition and went out on the run at a conservative pace and gave Lisa a smile. I worked hard during the run and tried to keep a constant pace and really concentrate on holding form. Having the leaders jersey on gave me a boost of confidence and I ran with a positive mind set. At the half way turn I didn’t see anyone for a while which gave me a lot of confidence that I would hold on for the win. I pushed through the last 2.5km and crossed the line in 1.06.29, 1st place in the 20-24 Age Group which gave me the series win and finished 1.28 ahead of 2nd place. I finished the run in 19.20 which I am really happy with and finished 15th overall. 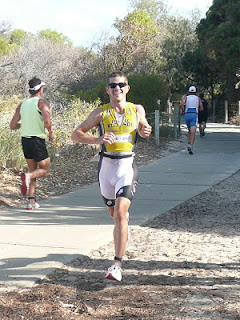 In summary I am really happy with my race and winning the Tri Events series was one of my goals for the season which I have now achieved. I also had the 6th best bike split which I am stoked with. I am now sitting second to Mark in the Triathlon WA Triathlete of the Year Series, by 5 points, so the Busselton Half Ironman will decide the overall series winner. Should make for a great race between us! I now have another 2 hard weeks before a 1 week taper for Busselton which will wrap up my season. 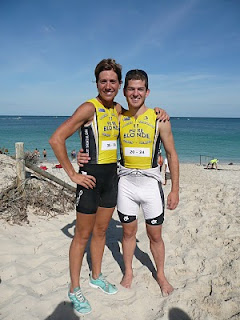