The Busselton 70.3 (as it is now known) is the biggest race on the Triathlon WA calendar each year. This year was no exception! With a sold out field of 1,400 individuals and 200 teams the atmosphere down in Busso was great!

We arrived on Thursday lunch time and checked into our house. WOW....It was amazing! I sure hope that will be our regular Busselton house from now on! Lisa and I helped Ian set up the XU1 Sports tent at the Expo before heading back home for my Birthday dinner :-) (I am now 22!)

On Friday Lisa and I went for a short ride out on the course and I also snuck in a quick run. It was then back ot the Expo to help sell some CEEPO bikes! We spent the day there (not ideal pre race prepeartion) with the exception of a short swim the the Eclipse Fitness Squad. We were lucky enough to have CEEPO sponsored athletes Belinda and Justin Granger stop by the tent and leave their bikes on display which was great!

I was lucky enough to use a set of Schnell Race wheels thanks to Karl Hardy from Schnell (also a sponsor of Team LSDsports.com). A quick change and gear turn up and these bad boys where ready to roll! 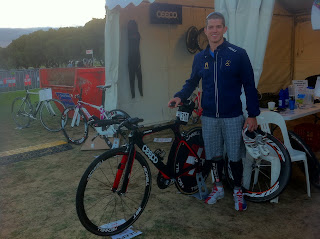 Race Day
I arrived at transition nice and early and went about setting up my gear for the day ahead. I then went to the Eclipse Fitness tent, dropped my bags and suited up in my wetsuit.

I walked down to the swim start by myself and went through my race plan prior to my warm up. Before long we were called into the starting compound and I found my position out the the left hand side. I was ready and as soon at the start gun went I hit the water hard. I had clear water in front of my for most of the swim which I like. On the way back to shore I started to pass a few of the slow swimmers from the previous wave. I felt I swam a pretty direct route around the course and was generally happy with the swim. 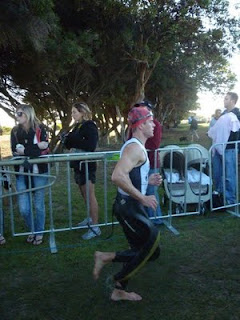 I found my bike easily in T1, it was very easy to spot the Schnell disc wheel! I ripped my wet suit off, buckled up my aero helmet and off I went.

Out onto the 90km bike course I had a 30 second gap to Matty Burton and a bit over a minute to Mark and Scotty. The initial stage of the ride was very important for me to get warmed up and my riding legs ready to go as I knew Matt would come past me at some point and I was going to go with him this time (unlike in Singapore). During this time I focused on keeping a slightly higher cadence and getting my nutrition down. As I was approaching Tuart Drive I saw Guy Crawford (on board a CEEPO Viper) smashing the ride with a decent gap to the the chase pack! Not long after I made the turn onto Tuart Drive and saw my training buddy Johan (in his first Pro race) not to far behind the main pack. I went to have my first gel but couldn't suck it out of the gel flask! (a post race inspection revealed i had not peeled the plastic under the lip off properly...) It took some time to unscrew the lid on the rough Tuart Drive road and of course, a full gel flask quickly became slightly less full as the gel went all over my hands and bars! I was in for a sticky 70km!

At the turn around I could see my gap to the boys and as expected Matty was hot on my heels (or wheels...). I was pretty happy to be able to hold him off that long. He eventually passed me about 30km into the ride and I was ready to go with him. However at the round about where we make a right hand turn back onto Layman Road he overshot the turn and had to back track.

I stayed with him for the rest of the 1st lap and I think I went through in about 1.04 and some change. At the start of the second lap the wind had picked up and we were in for a tough 22.5km to the turn around. I went to the front for a little bit along Geographe Bay Road but could not hold the pace Matt wanted to (sorry mate!). I pushed hard to stay in touch of Matt for the first half of the second lap and there were points the gap went out to about 30m. We picked up Matt (Bulldog) Jennings along the way and the three of us rode to the turn around. On the way back to town Matt put the pressure on, Bulldog went with him but I could not hold the pace. I rode the last 20km solo and got ready for the run ahead. I made sure I got the last of my nutrition and fluids down. I think Matt put about 1 minute on me by the end of the ride. 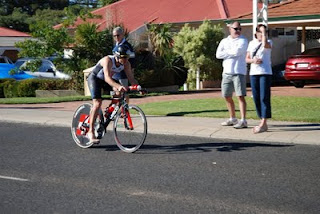 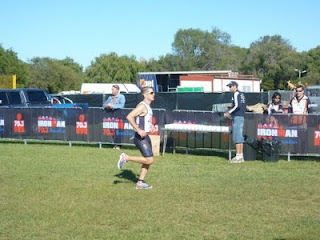 A had a quick transition on the way out had some support from my family. I was watching my GPS closely for the first few hundred meters to make sure I was not going out to hard and was running my target pace. 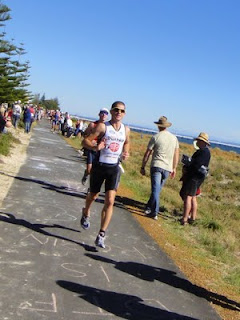 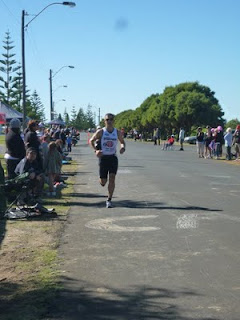 I could see Johan starting his second lap just ahead of me starting my run! I was feeling great! I was hitting my target pace and felt my form was good. At the turn around I saw Matt not to far in front and Johan yelled a few words of encouragement. I was very focused on my run and for the first time in a race felt like I was a runner! It is awesome going through the crowds at the end/beginning of each lap and I had a BIG smile on my face at the end of the first! I went through lap 1 in 28.40. The second lap was a carbon copy of the first (add 13 seconds and a few more people on the course). The third was tough but once I made it to the turn I pushed as hard as my body could go, I new I was on target for my sub 1.30. My final lap was 30.43. 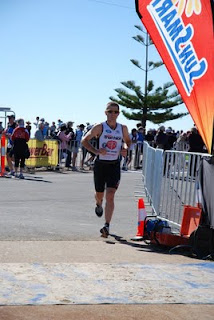 Running down the finishing chute seeing the clock say 4.40.41 (less 30mins as it was the pro time) was AMAZING I crossed the line knowing I achieved my goals was great.
Overall Time - 4.10.41
I finished 2nd in the 18-24 age group to Matty Burton.... Again! Matt finished in 4.06 - the guy is seriously fast. I was 18th overall and second age grouper across the line. 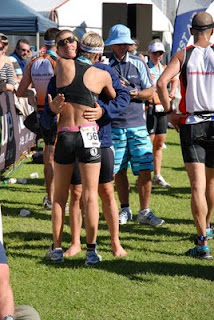 Lisa had a tough day on the course with a great swim and ride, she had a few issues with her legs out on the run causing her to sit out for 20mins! She still beat her time by more than 10 mins from last year and managed to get second in the 18-24 category! Not bad considering her legs didn't cooperate.
Mark also had a tough day out there but stuck at it and finished! Good work mate, you got my respect for not pulling the pin when things didn't go your way.
Congratulations to Helen King finally with the break through win that she thoroughly deserved!
I was a very happy little man after the race. I could not wipe the smile off my face!
A big thank you to Ian Mansfield and XU1 Sports, the CEEPO Venom is amazing! Karl Hardy from Schnell Wheels who set me up on a very fast wheel set for the race! The bike and those wheels helped me set a new PB ride time (just under 41km average) and put me in a position to run well off the bike!
Thanks also to Tony and Cam at LSDsports.com for their support throughout the season!
Stuart Durham my coach from Eclipse Fitness has got me to where I am today, thanks Stu. I'm looking forward to working towards bigger goals in the future! Also my main training partner Johan, thanks for pushing me throughout the season.
I set myself a goal to go sub 4.20 overall with a sub 1.30 run. I did both! An awesome way to finished a great season.
Cheers,
Andy
Posted by Andrew Tyack at 5:41 PM