I am currently sitting at the airport here in Kona waiting to board the flight to Honolulu. I came to this race with one goal, to win and to get a spot to the Big Dance in October. I was passed at mile 12 (19.3km) into the race and finished 1.30 behind the winner. Although I did not achieve what I set out to, the experience I have had here on the Big Island will help me develop as an athlete.

The swim start was a mass start for the age groupers (and there were approximately 1,700 competitors). I lined myself up towards the front and waited for the cannon. The start was pretty rough and I find it difficult to understand why weak swimmers seed themselves at the front of the race. The swim went out for about 600 meters before taking a right hand turn. During the first section the water calm and the visibility was incredible! Once we made the turn became very rough and hard to sight (similar to Busso). The front of the age group race somehow missed the final buoy and we were sent back. This was a bit frustrating; however everyone that I was around was affected by this so it had no major impact on the end result. This was the most physical swim I have been in and the women seem to be the worst!

T1 is in the car park at Hapuna Beach and we have to run up a hill to get there. Our transition gear had to be in bags so it was a slow transition, I even put my shoes on before running my bike out! I made sure that my nutrition was securely in my pockets and ran to the mount line and started the small climb directly out of transition. I was happy with the decision to get my shoes on first because people with their shoes clipped in were stuggling to get their feet in.

The bike course is one lap and takes a right hand turn onto the Queen K Highway (heading towards Kona) for about 4km, before making a U-turn at Mauna Lani and riding to Hawi and coming back to Mauni Lani where T2 was.

The climb out of T1 to the Queen K is not steep however coming out the swim and the wind makes it pretty difficult. Once out onto the Queen K I settled into a nice rhythm and made the most of the tail wind. I rode myself into the lead group at the turn around point and got a cheers from Ernie and Karen Bevilaqua. I rode with the guys in the front for a period of time before they put the hammer down. I stayed at the pace I was riding as I knew the climb to Hawi and the winds would take its toll on most. The trade winds were well and truly pumping, making it pretty difficult to keep the bike upright. I made sure that I was getting my nutrition down as early as possible because once at Hawi, it would be very difficult to do. From Kawaihae it is 19 miles to Hawi. I was riding conservitvley and doing my best to keep my bike tracking straight. It is difficult to describe the cross winds, but the first two words that pop into my head would be – stupid and unsafe. 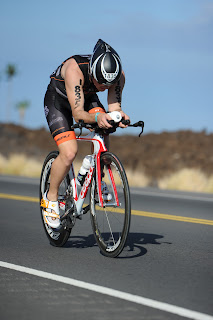 There is a street sign which marks 7 miles to Hawi and from there I started to build my effort on the bike. I made the turn and began the descent… It was fast and you had to concentrate. The wind was worse on the descent as you are more exposed on that side of the road. I went about getting down as fast as I could. There are a few cut outs in the rock which allows some protection and chances to take in some nutrition but you have to sit up and slow down to do so safely. I arrived in Kawaihae and one piece and began the 1 mile climb up to the Queen K, it felt like the wind had died down here (or maybe it was just protected). Back onto the Queen K the wind was stronger than ever, only 10km to go! I made the turn into the Mauna Lani and we had an epic tail wind (and slightly down hill), I was coasting at about 60km/hr and I heard my back tired puncture. This is the first time I have had a flat in a major race. I had about 2km to go rolled back slowly to transition on the flat. Not ideal… 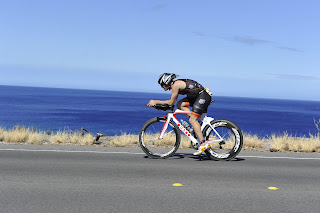 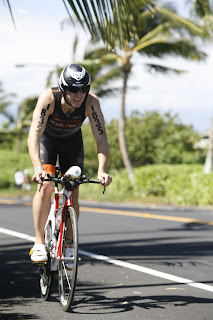 T2 was the one part I was worried about as I had not seen exactly where to rack my bike (this race has separate transitions). I was grateful for the awesome volunteers to were well prepared and showed my quickly to my rack. Once again the run gear was in a bag so another slow transition. I slipped my socks and shoes on, refreshed my nutrition supply and started the very memorable run. 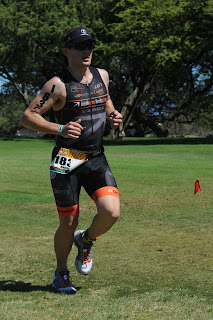 The run course is through the Mauna Lani golf estate, over fairways and cart paths. The run was again windy and tough. The course is all over the place with lots of turns so I knew that it would be a slow run. My legs were feeling pretty good and I held a steady pace. There were lots of aid stations through the run and I took on lots of ice and sponges. I went through period of holding a solid pace and then periods were I was struggling to hold a reasonable pace. The most difficult part of the race was an out and back section from mile 9 to 11, it was windy, hot and miserable! However after the out section, we had a nice tail wind which helped keep the pace up. Kate passed my coming out of this portion and encouraged me to keep up with her. I tired (if only…) but could not hold the pace. From there it was only a few km to go and I really struggled to hold any reasonable pace. At the mile 12 marker (approx. 19.3km), Jonathan Roth passed me… again I tried to pick up the pace but there was nothing in the legs to give. 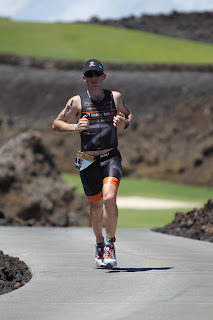 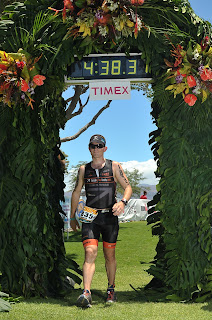 My experience on the Big Island is one I will always remember!

I would like to thank Kate Bevilaqua and Guy Crawford for looking after me for the week and for all their advice, it is really appreciated. Also a huge thank you to Kate’s parents Ernie and Karen for all their support.

Thanks to LMW Hegney/Hegney Property Group for helping me get to the Big Island and to my other supporters, Team Break Your Limits, K Swiss, Total Triathlon, XU1 Sports for all their help along the way. Also thanks to Mark Luckin for the loan of his swim skin and to Sean Jermy for the use of his wheel!