When I crossed the finish line at Augusta in 2009, I told myself I wanted to crack the top 10 in 2010. That was my goal going into the race (as well as not getting chicked!). 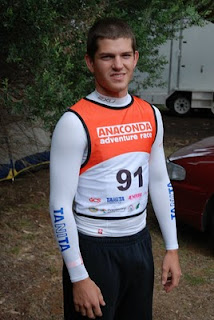 The race start was at the Lewin lighthouse. It is a spectacular place to start the race and the media helicopter was putting on a awesome show hovering and flying around getting great shots of the start. We had a bagpipe player on the rocks with us playing some music prior to the race start at 8am. I knew the start was one of the most critical parts of the race as there is a bottleneck within 50 metres. I lined up on the front line and went hard from the start. Another competitor lost his footing and pushed me as he was falling, which pushed me off my line. I didn’t fall and recovered quickly. I managed to get through with a clear line and settle into a rhythm over the rocks. The first 1.5km is involves rock hopping following the coast around before heading inland. I was in a good position and started over taking the guys that were heroes on the start line. Deanna Blegg (female winner) was running with a small group of us before stamping her authority on the race and put the hammer down. We double back onto the beach and start the next section of sand and rock hopping (approx 8km). The sand was pretty good to us as it was hard in most sections, there were a few soft sections, which were slow going but on the whole the beach was pretty good to us! I was strong over any rock sections and made up some ground to the guys in front. We had the helicopter following us which was awesome. I had awesome support from Lisa and Mark out on the course, following the run and getting down on the beach where they could. Was great seeing them and hearing words of encouragement always makes it easy to push a bit harder. The final part of the run was back inland and on flat sand tracks. It took me a while for the legs to adjust to the fast tempo but I eventually got them moving. I focused on getting some nutrition down and fluid down before the swim. I came into transition in 1.16.32.

I new what I had to do in transition, I had been through it in my head leading into the race and just before getting into the transition area, but that isn’t quite how it played out in real life. I ripped my bib off and pulled my wetsuit on quickly. I grabbed my drink bottle I had ready, expecting water, and had Gatorade, the bottle which was supposed to be in my bike! Grabbed my goggles and cap and ran out of transitions, just about at the water and a spectator yells out to me that I didn’t have my bib on! Armature mistake! Quick run back, Mark threw it back to me and I was asking him to change the bottles on my bike to the Gatorade. Another lady passed me my cap that I dropped on the way back to the water. I still had a fast transition considering, but that did not go to plan. 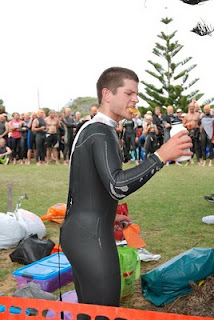 I just wanted water! (the orange stuff is Gatorade)

The swim was hard. No other way to describe it. Swimming after a hard run like I just did was tough. It felt like I was swimming very slowly, and I was compared to how I usually swim, but I was making up ground to the guys in front. I had trouble sighting the buoys and had to stop and take my goggles off to check where they were a few times. A couple of team swimmers passed me along the way. My triceps were killing me during the swim. I just kept turning the arms over knowing that I would eventually get there. I got to transition in 35.11 and now in 9th. 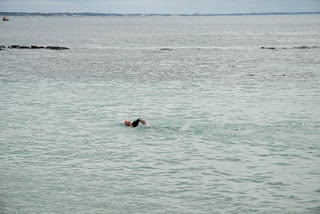 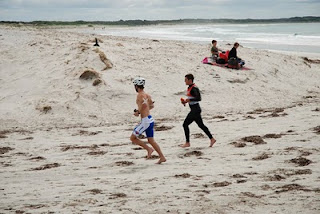 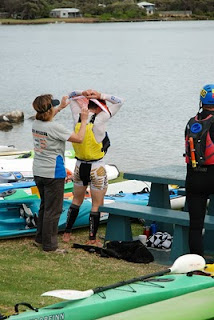 The nice lady helping me get ready.

I had a nice lady help me get my wetsuit off and put my bib back on over my PFD. Was a little less eventful then T1!

This is easily my weakest leg. I just had to work as hard as I could during the paddle and minimise my losses. We had a nice current for about 2km pushing us out the river mouth and then out into the ocean. There was a head wind going out to the turn around. It was a hard slog for me. I consciously drank my water and had a gel when I needed. At the turn around I was happy with how I was going and was hoping to make use of the small runs that were forming. There were very small and I had to work hard to get on them. I just didn’t have the energy to work that hard to the return trip was pretty slow going. I eventually saw the finish of the paddle and was happy to be there that’s for sure. I was back to 20th place! I finished the paddle in 1.22.01.

We had to carry our ski up the boat ramp and to a grassed area. It was pretty tough! I was happy to put the paddle down for the last time and get onto the bike. I ran to my bike and made the transition quickly. 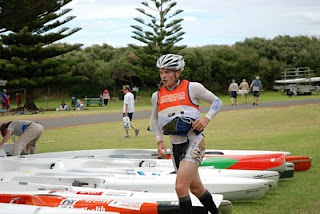 I was getting pretty tired by this point in the race. I got out on the bike and made it to the first hill and went about getting up it as quickly as I could. I was drinking and eating while I had the chance. The first climb is about 2km, and is just long grind up a gravel track. There is then a down hill section which is pretty rough, lots of loose tree roots and very sandy. The track then goes to a fast flat section before heading up the next hill. This hill is a hike a bike hill and it was time to get off and walk it up. I tried running but the calves did not like that, so it was a slow walk pushing the bike up! Once up the top I got back on my bike and pushed as hard as I could. I was going through some high and low patches at this point. I made the effort to keep getting fluid and nutrition down and pushed hard when I was feeling average and even hard when I felt good. I eventually passed Deanna Blegg on the bike with a couple of km to go and gave a few words of encouragement. She had a big smile on her face and was smashing the woman’s field. 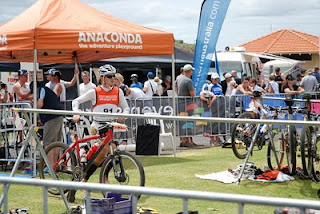 I was back at transitions in 1.28.34. I had a triathlon like transition with me feet on my shoes, quick change over into the racing flats and ran hard out of transition for the last 2.5km run. 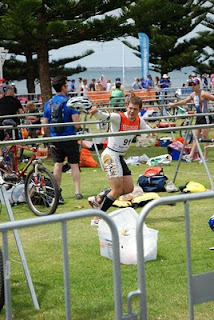 Speedy transition, already off and I still had my helmet in my hand!

This was HARD! my legs were toast. I pushed as hard as I could as Mark was telling me there were a few guys just ahead of me. I push and pushed and felt like I was going no where. I had a bit of time to reflect on the run back to the finished line and I was happy with my race, no matter what the time was when I crossed the line and raced as hard as I could go. I finished the run in 14.58. 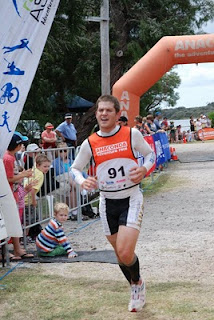 There might have been a swear word yelled out when I was called over the line in 12th place...AGAIN! I was very happy to finally be finished.

My finishing time was 4.57.16 and 12th Open Male. I just got to the finish line before Deanna Blegg. At least I achieved 1 of the goals I set! 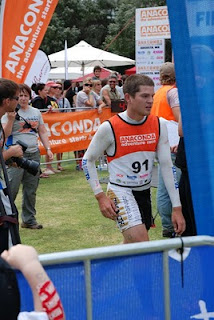 In my last 3 Anaconda Adventure Races, 2 in Augusta and 1 in the Gold Coast, I have come 12th, so I am consistent! I am really happy with my race. I can honestly say I went as hard as I could on the day.

Thanks to Mark for driving my car down on Saturday, setting my gear up and also our tent. Also, thanks to Lisa for driving me down on Saturday night, after Brent and Erin’s wedding. We only arrived at 2am and had 3 hours sleep! Not ideal preparation and I was pretty wrecked a few hours after the race! Lisa and Mark were the best support crew on race day, getting to every point they could to see me! It really makes the race easier! 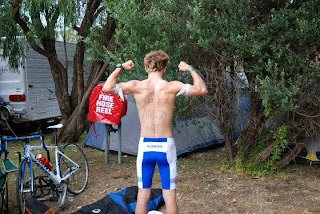 This has become Mark's tradition, no shirt while supporting!

Also thanks to Kevin and the team at Tanita! Tanita is one of the major sponsors of the event and I was lucky enough to get sponsored by them for the race. Team Tanita had some great results with Sean O'Neill and Brendan Sarson, winning the Open Team of Two category and Grant Suckling came 2nd. Great work guys!

I'm back on the time trial bike now with the Canberra Half Ironman coming up in 5 weeks!