Race Morning
Geelong is an interesting place at 5am walking down Moorabool Street (there were a lot of people from the night before stumbling around the streets and out of the few clubs that were still open). We heard a few funny remarks from some a few people as we walked down in our sober state with bike pumps and Lycra!

I set up my transition area, pumped the 808s and mentally went through my race. I went and had a look at some of the pros getting ready, pretty awesome seeing the World Ironman Champion setting his bike and transition up. I went for quick run up jog and got ready for the race start. 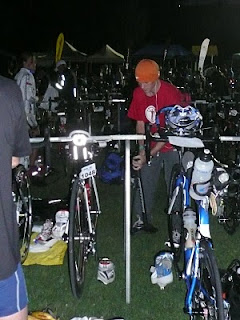 Swim
The swim was a mass start and was a triangular course. I started towards the front of the swim and went out hard from the start. I felt comfortable on the way out to the first turning can but I didn't have the best line going out. There were some big, hard jellyfish in the bay which freaked me out a bit, although I think I was one of the lucky ones who didn't get stung. After turning the first can we were heading into some chop with the sun shining in our eyes making it hard to sight the turning can. I existed the water in 27.35, slower then I was hoping. I didn't make good decisions in the swim with my lines (partly due to difficulties is sighting the cans). 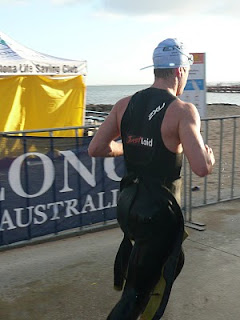 Into T1 i whipped my wetsuit off, helmet on and I was out onto the bike in 1.50 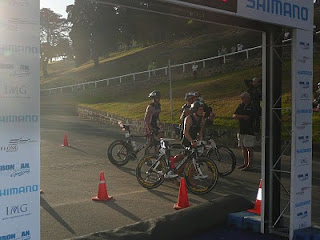 Bike
My goal was to ride conservatively and save my legs for the run. The bike course was 3 laps and some what undulating. The drafting throughout the bike course was terrible and the TO's didn't do much to help the situation. I rode honestly all day and leg the big groups go by me (which in hindsight was the wrong move, again, i did this at busso half last year, I need to just go with them). It was really disappointing and drafting is becoming a joke in these races. It looked like a Sunday morning group ride which is basically was. People were sitting on each others wheels. When a group came past me i sat in with them for a while, the legal distance and people continually dropped in on me pushing me back and back so I sat up and let them go. Often a TO was sitting next to the group and then continued to draft with the TO's doing nothing!! And this was all in the first lap. Once I let the group go i assumed that the TO's would do something to police the situation (assuming i would see people in the penalty box as I came through the gardens), but not ONE person was in there!! 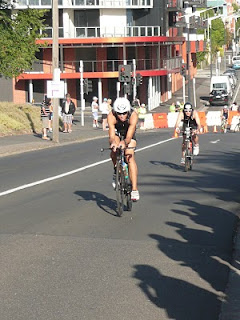 I rode the first lap with Johan before he got away in the 2nd.

On the third lap I was trailing behind a small group with a few female pro's. A TO was on the bike next to this group with age group men and these pro girls and one of the pro girls who was clearly riding legally was given a penalty. I went up to her and said that was rubbish and i will back her up if she complains (if that was possible).

I was generally happy with my ride, although I need to learn to just go with the groups. I stuck to my hydration and nutrition plan and hit T2 in 2.24.51 feeling great and was out on the run in 1.08. 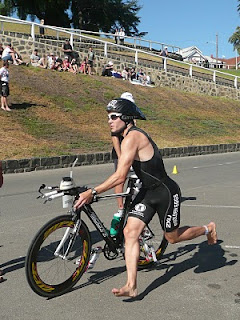 Run
This was going to make or break my race (obviously). My plan was to go out easy and build into the run. I did just that for the first 2 laps. I was ticking over nicely and felt comfortable. I was getting my gels down and having a drink of water at each aid station. I slowed a bit in the third lap but I managed to run the whole way this time (unlike busso last year!). Towards the end i was looking at my watch trying to work out what time I was going to finish in (I had put down 4.35 when i entered but i was hoping to go under 4.30). I completed the run in 1.38.15 and crossed the line in 4.33.41. It is a PB by about 12 mins. I am happy with the overall time of my race but there are some aspects I need to work on! 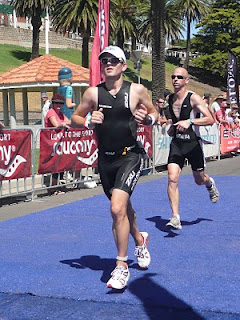 I had a great trip over to Geelong with Lisa (our support), and Johan (who smoked the course in 4.13) and Helen (5.17, just missing out on 3rd). I am generally happy with my race and the direction things are heading (although I am starting to realise it is going to take time to get to the top in these bigger races).